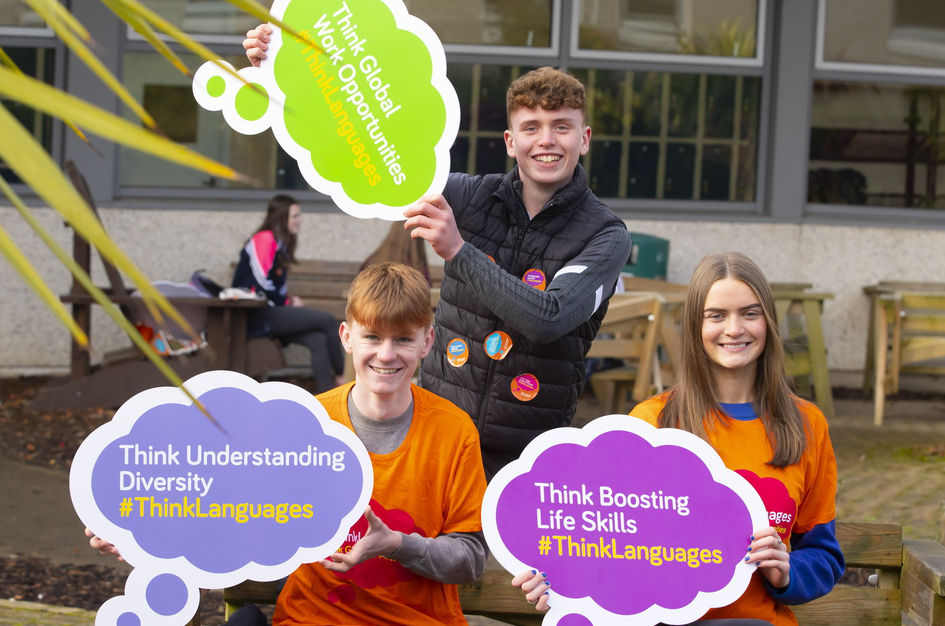 15,000 TY Students Nationwide to Celebrate Languages and Cultures at #ThinkLanguages 2022

Dublin 17 November 2022:  The fifth annual #ThinkLanguages event looks set to be the biggest yet with 15,000 students taking part in the annual celebration of languages and culture, starting November 17th. Over 180 schools across the country have signed up to the Languages Connect flagship event, which has quickly become a highlight of the TY calendar. The event has grown considerably since its inception five years ago, underlining the growing interest in foreign language learning in Ireland.

This year’s theme focuses on “Think Global, Act Local” as students are encouraged to look to the diversity of languages spoken within their school, community and beyond as inspiration for their individual events. Schools have embraced this theme as speakers from a cross section of the local business community have been lined up, as well as students and parents who will also be offering insights into their heritage cultures and languages, including those from the Ukrainian community.

Minister for Education Norma Foley TD said, “#ThinkLanguages has gone from strength to strength, growing annually, promoting diversity and providing ever more students with fascinating sessions that give them a broad flavour of the richness of language and culture from across the globe. Being able to understand and speak another language opens students up to a whole world of culture, art, literature, philosophy and wider opportunity, and this event thrives on the involvement of students, teachers and school staff as well as parents. It is also wonderful that so many events are recognising and embracing the diversity of our communities, as schools bring this unique celebration of languages and culture to their students.”

This year’s Opening Ceremony includes inspirational insights from Peter Sherrard, CEO of the Olympic Council of Ireland and fluent French and Italian speaker. Peter’s language skills have proven to be a catalyst for opportunities within his career, including roles with Ryanair and Tourism Ireland in Italy, and the FAI on his return home. These invaluable skills are being called upon once again in his current position as Ireland prepare for the upcoming Olympic games in France and Italy.

Speaking about this year’s #ThinkLanguages, Karen Ruddock, Director, Post Primary Language Ireland which facilitates Languages Connect, said “Skills in a foreign language can significantly improve career prospects for Irish students and give a distinct advantage in the evolving local and global economy. This event encourages students to think about languages beyond the classroom and consider keeping on, or picking up, a modern foreign language in Senior Cycle and into Third Level.”

Students have been busy preparing for #ThinkLanguages 2022 for weeks as each event is tailormade by individual schools with the support of Languages Connect, an awareness raising campaign facilitated by Post Primary Languages Ireland. Funded by the Department of Education, Languages Connect was launched to support a strong, growing economy while also promoting a multicultural and inclusive society, which is a key objective of Irelands Strategy for Foreign Languages in Education

Event management packs and supports have been delivered by Languages Connect to all schools for this year’s celebration, and an array of pre-recorded and live workshops have also been made available. This year students can enjoy sessions such as Korean and Taekwondo, German and the Viennese Waltz, Portuguese and Capoeira, Spanish and Latin American Percussion and Translation with EC Translators, to name just a few.

Languages Connect promotes the personal, social, professional, and economic benefits of foreign language skills to principals, teachers, guidance counsellors, parents, and students. Funded by the Department of Education and facilitated by Post Primary Languages Ireland, as a key objective of the Languages Connect – Ireland’s Strategy for Foreign Languages in Education 2017 – 2026. For all the latest updates check out www.languagesconnect.ie or follow us on Twitter, Facebook, and Instagram